Mark Twain was out and about this week. On Tuesday he joined the Berks County Visiting Nurses for
a volunteer appreciation luncheon, and then Friday he spoke for two hours to an audience of students from Exeter High School.

When asked if he enjoyed his speaking engagements, the man in the white suit said, “The nurses were most caring and kind. I felt surrounded by a room full of Florence Nightingales. As for the students, I kept the paddle close, but never took it out of the sack. I enjoy my time very much with the young scholars.”

LAURELDALE’S ROGER Mallon is a writer, TV and radio producer, fisherman, dog owner, outdoorsman, and provider of meaningful outdoor experiences for the youth of our community. Over the years he has found multiple ways to share his talent and passion with thousands in Berks County and beyond, including writing an outdoors column for the Reading Eagle and hosting a radio show on WEEU.

A few years ago, I was not surprised when I received an email from Roger telling me he created and was performing a one-man show called “Here’s Mark Twain.” With a flair for the theatrical, Roger figured out that if he grew his thick white hair long, then donned a white suit, he bore a convincing resemblance to one of America’s great folkloric humorists, writers and performers — Mark Twain. Most people know that Mark Twain’s real name was Samuel Langhorne Clemens, who wrote “The Adventures of Tom Sawyer” and its sequel, “Adventures of Huckleberry Finn,” the latter often called the great American novel.

Soon after Roger developed his act, I included him in a show my writing colleague, Charles J. Adams III, and I created, and presented at Stokesay Castle on Mount Penn. Roger, or rather, Mark Twain, appeared in the show, and I sat and watched him captivate the large audience with his prose and tales, using skilled storytelling, theater of the mind delivery and attention-getting voice inflection. Twain’s shows often included anything from tales of bucolic pastimes to ghosts to how to conquer a glacier. 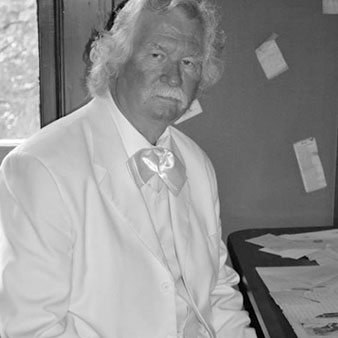 So, of all characters to choose from, why imitate Mark Twain, and how long did it take to fine tune the portrayal?
“I’ve been doing this one-man show for two years now, more than 40 appearances, and I’m still working to improve it with each presentation,” Roger said. “I was looking for something creative to do during my retirement years, and the thought of doing a one-man show had been on my mind for a few years. My mustache was a determining factor in my choosing Twain to impersonate, and so was my white/gray hair. “When I looked in a mirror I didn’t see Teddy Roosevelt or Abraham Lincoln, but I did see a hint of the kid from Hannibal,” he said. “I spent several months reading and researching Twain’s life and writings and developed several themes: biography, witticisms, social and political mores and humor,” Roger said. “Then for several more months I stitched material together into a very long speech, which, by the way, has since gone through no fewer than 10 rewrites.” He told how he hired Kristopher Updike, a drama instructor at Albright College, to help him memorize and stage the presentation, a process that took three months. “I wanted my costume, mannerisms and voice to be as authentic as possible, and fortunately there is plenty of written evidence to support a re-enactment of Twain’s stage presence and delivery,” Roger said.
According to Roger’s research, Twain wrote about his views of public speaking, humor and script construction, and it’s not widely known, but he tested his speeches in small towns before taking them to larger venues in the bigger cities.

While there are lots of photos and written accounts of Twain, Mallon found out it was going to be a challenge to figure out how to reproduce Twain’s reallife delivery. “How to imitate his voice was particularly puzzling since there are no recordings of it,” Roger said. “Contemporary newspaper writers both transcribed his speeches and described his delivery. (‘He spoke slowly, maybe three words a minute.’) As for Twain’s opinion of speech delivery, he didn’t like people reading an entire speech to an audience, unless it was someone like Charles Dickens, whose readings were very popular back in the day. He also tried to memorize his speeches instead of reading them. As for notes, his were minimal, and sometimes simply drawings of pictorial reminders.”

Roger said every show he performs is an opportunity to improve his delivery. Audiences are responding in a positive way and all of his bookings are from word of mouth, which he finds very gratifying. If you’re interested in what Roger does, you can contact him at 610-451-3336, or www.  HeresMarkTwain.com. Dave   Kline is producer and host of the weekly “Mountain Folk Radio & Web Show” on WEEU 830 AM and chief advertising and sales officer for Reading Eagle Company. Contact him at dkline@readingeagle.com  .

Would you recommend Here’s Mark Twain?

...and leave a helpful review.
We're sorry we didn't meet expectations. How can we do better in the future?
Thanks for your feedback. We're disappointed that we didn't live up to your expectations. We'll review your feedback and work to improve.
Leave a Public Review
Rocking Reviews